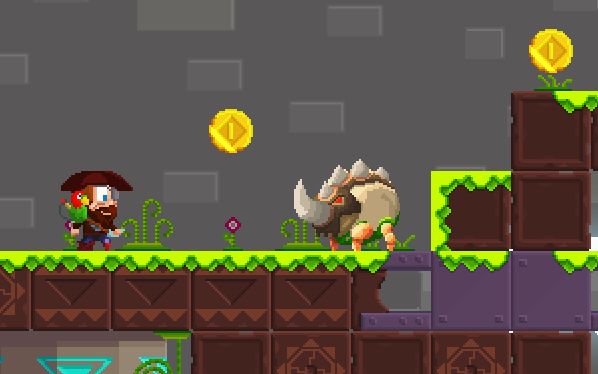 Lots to share. We redid the charger and bomber look. They were too small and didn’t have the presence that they deserved. Also added a variety of small effects like hit/spark effect and gold chips effect from the Midas gun.

New Charger Look
The charger was beefed up and his spikes were highlighted a little more. Kinda went for the warthog/rhino blend. Here he is getting annoyed!
New Bomber Look
We also wanted to beef this guy up. But we also increased the armor and made it impervious to regular stomp attacks like the rock thrower. We gave the bomber a bright color to make it visually distinction from the other rock creatures. Not sure what we went for here (flying spider?) but he looks a lot more menacing that we originally intended.
Luchador Attacks in Motion
We shared screenshots of this a couple weeks ago but here’s the updated Luchador attacks in action.

Melee Strike Effect
Added strike effect for melee and stomp attacks. Also melee attacks cause the enemies to fall back.