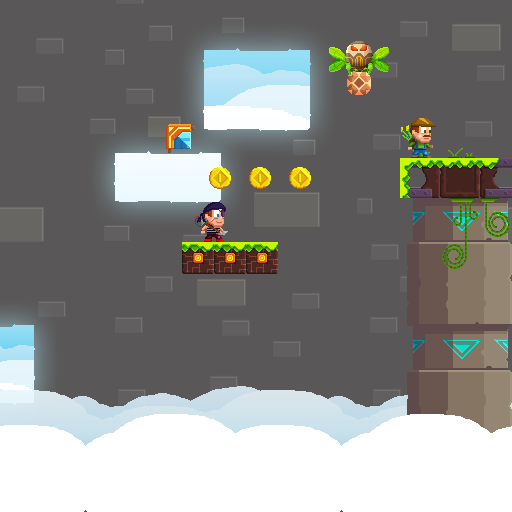 This week we’ve been outlining the various items in the game and decided to implement a leveling system for the items. So each item will have 3 levels. Each subsequent level increases the item’s strength or ability. This should encourage the player to risk going for those mystery boxes.

Yes, the player gets power-ups in the form of increasingly pirate-y abilities. At first I wanted to do a ninja power-up, but that wasn’t ridiculous enough. So I went for the pirate power up.
Pirate Level 1
The first level gives you access to the rope swing or hang. The player throws the rope and it latches on stationary blocks or walls. You can also attack certain enemies with the rope swing. I’m still working out the physics but wanted to share what I have working, so here’s the rope swing in action.
Pirate Level 2
Get the rope swing plus melee sword attack. This melee attack works on certain enemies and with limited range, so be careful when using it.
Pirate Level 3
YARR, a pirate captain, ye be! And like all stereotypical pirate captains you get a parrot. When in the air, press the jump button to get the parrot to start flapping and reduce your fall speed, briefly. You also get all the abilities in pirate level 2.