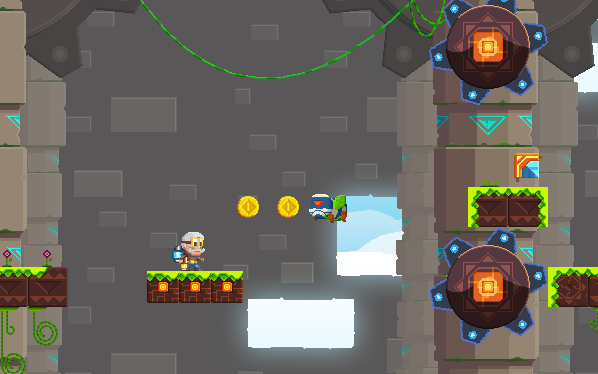 This week we’ve got some screenshots from a new power-up: the gadget-inclined prospector! This power-up uses gadgets to collect, make, and get to hard-to-reach coins. His gadgets are powered by his energy tank, which he carries on his back. A power meter shows how much available energy the tank has. But luckily, the energy tank recharges within gravity fields.

Prospector Level 1 – Coin Magnet
This guy is equipped with a coin attract-o gun. This gadget is activated in the air when the player presses the action button. It creates a directional gravity field to draw in nearby coins.
Prospector Level 2 – Midas Gun
Upgrade to the king midas gun. Not only does it attract coins when shot in the air, but when fired on the ground, the gun shoots gold beams to temporarily freeze enemies in gold. Destroy those frozen enemies by stomping on them and they explode in coin(s).
Prospector Level 3 – Jetpack
In addition to the midas gun, his energy tank converts into a jetpack! Use the jetpack to get out of tricky situations or use it to fly to out-of-reach coins and platforms.